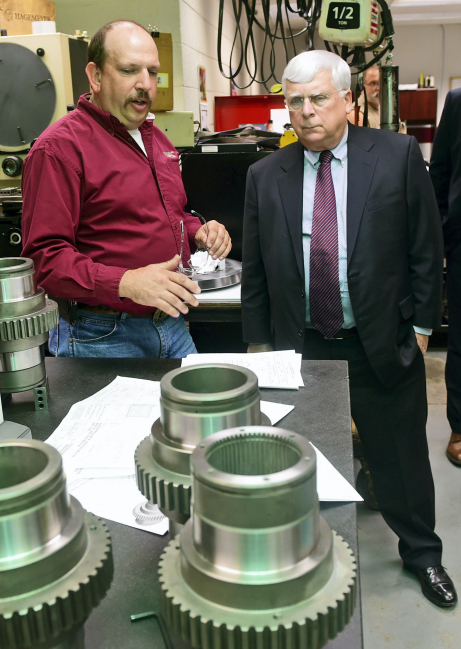 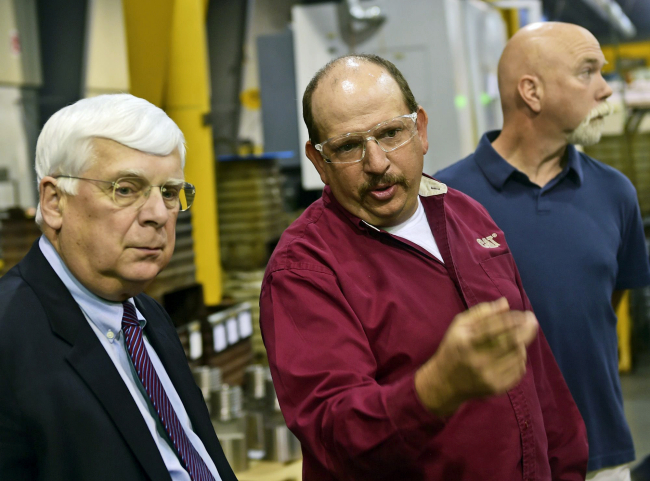 The McConnellsburg machine shop makes metal components for other manufacturers, including parts used in drilling equipment.

Alan Walker, secretary of the Pennsylvania Department of Community and Economic Development, toured the plant and met with company officials on Monday.

Company President Walter Barmont and Vice President Greg Fuller Sr. told Walker that the two biggest challenges for the company right now are getting a foot in the drilling industry and finding a quality work force.

"We feel we have a lot of capabilities with the equipment we have, the facilities we have, as well as the location. We can much better serve the shale gas industry than we currently do, but we're having a difficult time breaking in," Barmont said. "If you're smack dab in the middle, you might have an opportunity, but we're on the fringe being in Fulton County."

Walker said he is trying to tour as many Pennsylvania manufacturers as possible because of Gov. Corbett's manufacturing initiatives. Manufacturing accounts for 12 percent of the economy and has the most potential for growth, Walker said.

"Because of what's going on in China, U.S. manufacturing is now more competitive," Walker said. "As this reshoring takes place, and work moves here from China or Mexico, we want to make sure Pennsylvania doesn't miss out."

Pennsylvania industry is in a good position to take advantage of the natural gas drilling industry in the Marcellus Shale region, but Barmont said manufacturers tend to seek out suppliers in the oil district of Oklahoma and Texas.

"We think Pennsylvania has just as good a supply chain. We need to tap into it," Barmont said.

The discussion also turned to education and work force development.

For years, the local industry has been wrestling with how to attract young people into skilled labor positions. Barmont said the emphasis on preparing students for college has not done the manufacturing industry any favors, adding that the company has "a lot of people making very good money."

"We don't train people for manufacturing," he said.

"We have to change that mindset," Walker said.

Walker said that has heard the same work force concerns from other manufacturers in the state.

"We're trying to tie what vocational schools are teaching to what manufacturers need," Walker said.

Fulton Precision Industries was started in 1996 with two machines and has since grown to a 78,000-square-foot shop with about 70 employees. About half of the work force is from Fulton County.

The company makes components for Caterpillar and rock drill bits for Atlas Copco and Center Rock.

"We do a lot of work with Caterpillar but we also do a lot of work in drilling business," Barmont said. "What we do is a small portion of that entire scope of business in the Marcellus Shale. We're just a sub-supplier for them."